INVESTIGATIVE SUMMARY OF BROADCASTS.
INTRODUCTION
A lot have been and is being broadcasted about this topic through the different medias recently. For majority of us, it still is a conundrum that we longed for the real picture and the truth. I am dragged in, to lend my hand for innocent victims of cyber war who indeed are toasted between the realist and the opportunist. A map can explain more than thousands of words. This summary will unveil the demagogue, buried inside the words and phrases that have been disseminated through the different medias.
VIDEOS USED IN THE SUMMARY (all uploaded on YouTube)
click on the hyperlinks or copy and paste the URL 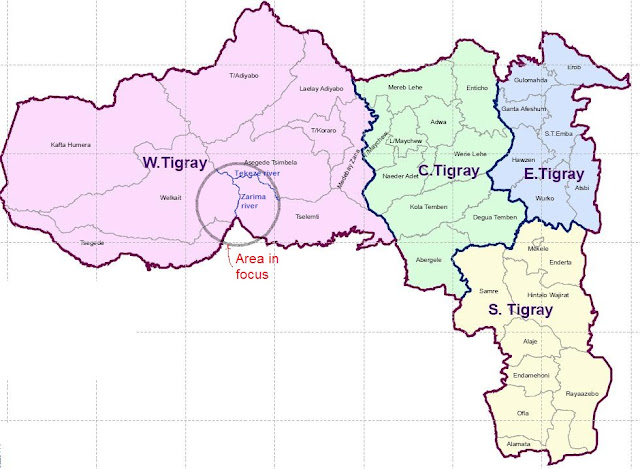 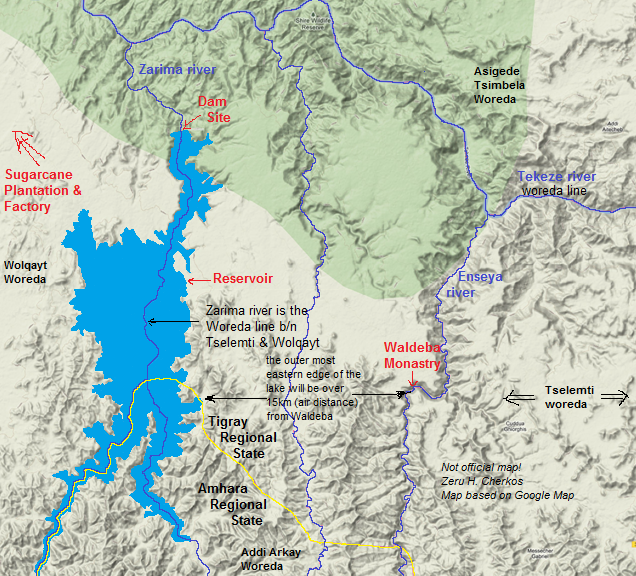 Fig 2. closer view of the area in focus with details.
1. ZARIMA RIVER

please note that to view the location of a given coordinate, follow the steps below.
a. copy & past the coordinates in Google web site search box
b. click search command next to the search box or press the enter key.
c. click the map link on top left of the website.
Or
If hyperlinked, just click it.
Zarima river is one of the west/south bank tributary of Tekeze river which is found in the Tekeze Basin. Starting on the north side of Siemen Mountains (Debark vicinity ~ 3200 meters above sea level; m.a.s.l), the river flows north to confluence with Tekeze river at coordinates ( 13.860081,37.76825 ) & elevation/altitude 780 m.a.s.l. The river streches over 115 kilometers. Zarima river has significant tributaries which one of the west bank tributary is a land mark demarcating regional line between Amhara National Regional State and Tigray National Regional State ( 13.638271,37.780738 coordinates of the confluence of Zarima river and the said river). From its source up to this point, Zarima river flows in the Amhara National Regional State, while the later demarcates the limits of two Woredas namely Tselemti Woreda & Wolqayt woreda in western Tigray National Regional State. Other significant land mark along Zarima's river course include Zarima town (coordinates 13.340017,37.882576) located on the  north bank of Zarima river where the main highway running between Gondar and Shire (highway 3 per Google map) crosses Zarima river.
2. WOLKAYITE IRRIGATION PROJECT
2.1. THE DAM 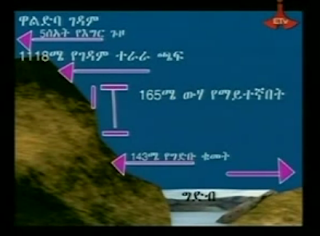 Fig 3. statics of the dam from the film footage of video 2
The main aspect of this project includes building a dam on Zarima river. On video 2 (fast forward to 0:10 here in after referred as FF 0:10), the foundation of the dam is said to be laid on altitude/elevation 810 m.a.s.l. Cascading down from ~3200 MASL to ~780 m.a.s.l, Zarima's river course intercepts the elevation/altitude 810 m.a.s.l around 8 kilometers upstream from its confluence with Tekeze river (coordinates 13.816536,37.79696), which is going to be the dam site.  The dam height mentioned on this video is 143 meters, which defines the elevation of the crest of the dam to be 953 m.a.s.l. The dam defines all aspects of the lake created.
2.2 THE LAKE
By definition, full capacity of a dam doesn't indicate the lake surface elevation to be equal to the elevation of the crest of the dam. If so, there will be uncontrolled overflow of water which otherwise can be called emergency situation (a rare to none to happen). To consider the optimistic size of the created lake, this worst case scenario is considered on this summary. This assumption defines the surface elevation of the lake to be 953 m.a.s.l. The map produced, based on Google map shown above considered contour line 960 instead of 953. This means that the perimeter of the lake is the 960 contour line traced on Google map. Three facts led for this consideration.
3.WALDEBA MONASTRY
As it is rich in history and age, a lot can be said around the different aspects of Waldeba Monastery. Leaving aside all, this summary will be tuned on the where about of it and its interference, if any, with Wolkayite Irrigation Project.
3.1 Location
Any potential resource leading to the specific location of the monastery is investigated below.
So, where exactly is the Monastry located at?
Under the slogan "Let's describe the whole world," wikimapia.org has opened doors for any body interested on locating what so ever on a map. Under the key word "waldiba monastery" (click it), some one had tried to point the monastery. The pointed location does not represent Waldeba Monastery for the following reasons. 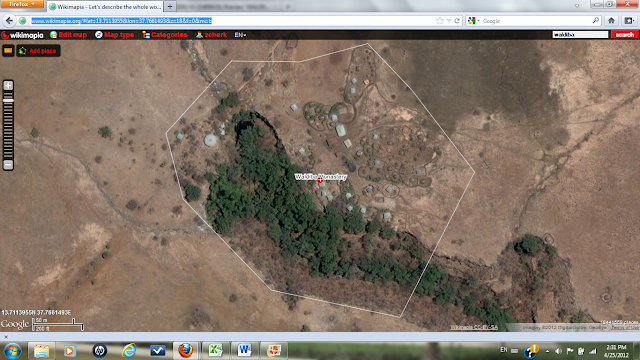 Fig 4. the located place on Wikimapia under the key word "waldiba" 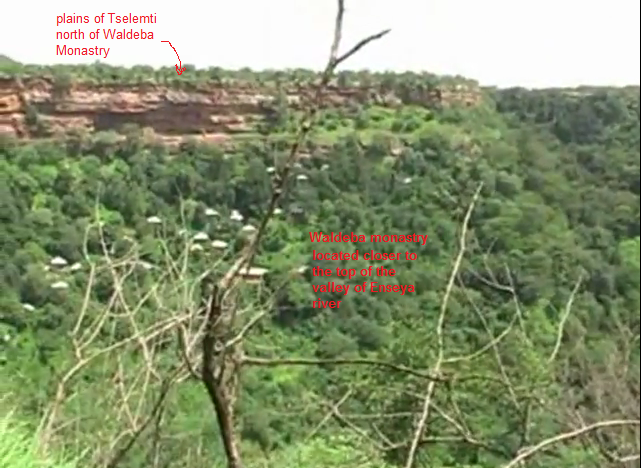 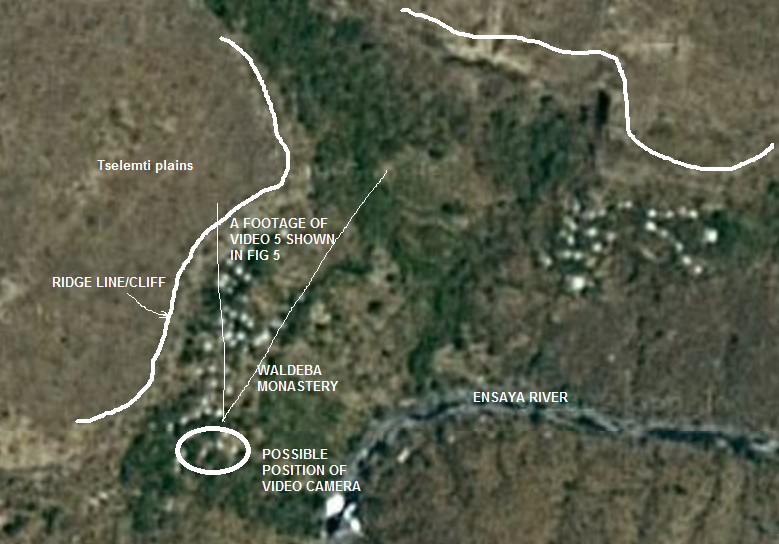 Fig 6. Waldeba Monastery as seen on Google map.
The exact location of Waldiba Monastery is  at the coordinates 13.632182,37.964072. It is now described on wikimapia.org under the key word WALDEBA MONASTERY. It will be lame to end the investigative summary at this point. There is one unanswered question! Does the Irrigation project interfere with the monastery? The dam itself is out of question which is 28 kilometers away (air distance) in the north west direction from Waldeba Monastery. The far most eastern edge and the closest part of the lake to the monastery (coordinates 13.62163,37.817388) will be ~15 kilometers away from Waldeba Monastery; hence there will be no interference of the two!
4. CONCLUSION

This summary will put the opportunist on a cul-de-sac, liberating the innocent victims of lie in a cyber war, and bringing the drama to an end. The absolute opportunist (some countries and global organizations), who never want to see a prospered Ethiopia, will never alter their strategy. It is proven on a number of macro and micro dam projects that Ethiopia is/was engaged. As to the local opportunist, let it be clear that development driven Ethiopians will stand united in the fight against poverty without compromising development projects with politics.  The wrong ball (politics), on the  wrong field (development projects), obviously scored "ፎሪ" (in soccer language). Truth will always prevail. If you may, listen your uneasy stomach that is telling you how Ethiopia deeply needs these development projects.